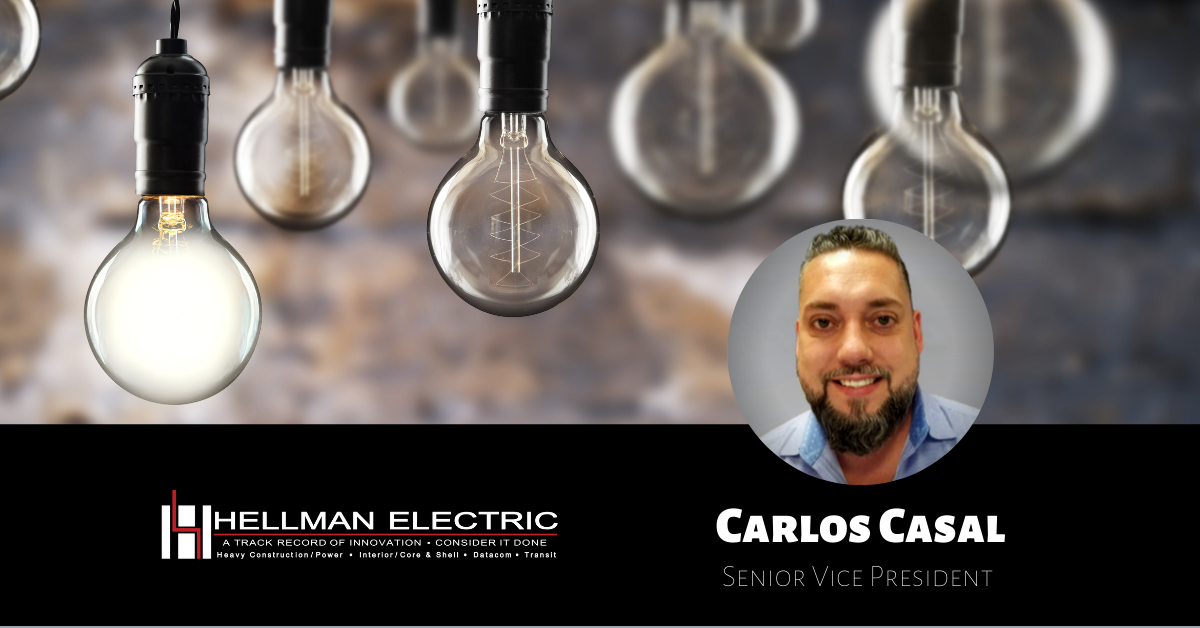 An intricate part of the success of Hellman Electric lies within its leadership. This special blog series offers an up-close look at the five leaders behind this award-winning company.

Carlos Casal began at Hellman Electric as an intern, now years later he leads as the Senior Vice President of Project Management where he oversees the Heavy Construction division. Carlos attributes his success and drive to the intrinsic values instilled by his father followed closely by his desire to succeed and grow on a daily basis.

It was that drive that allowed him to obtain his degree in Electrical Engineering, with a concentration in Communication Systems. Mr. Casal feels his educational background and his experiences from the NYSDOT ITS program over the years, led him to his current position where he oversees an office staff of 25 professionals coupled with a field team that together, are running $200M of work in the public sector.

“The experience and knowledge I garnered from those projects made me an expert in that space and gave me the confidence I needed to pursue new challenges in security and communications.”

Currently, Casal provides executive oversight of an MTA Design-Build Security project and says the team’s success with this project has been a huge source of motivation.

Casal says the Design-Build industry has opened up new opportunities for Hellman to showcase its talents, strengths, and technical prowess.

“It’s rejuvenated our team of professionals and has presented us all with new challenges and paths for growth in an emerging aspect of our industry.”

Casal takes the stance at Hellman to lead not only by example but also as a team player. He believes in defining roles, managing expectations and guiding his staff to help them meet their full potential. Additionally, Casal has no problem rolling up his sleeves to demonstrate that anything he asks his team to do can be accomplished.

“I often use an educator’s model. I love to teach and prepare my team for the various obstacles one will encounter on their path. Without the team, there is no success. I believe in that ideology through to my core.”

Whether it’s leading multi-million dollar projects at work or coaching his children’s softball and basketball leagues, Casal says he puts his best foot forward in any situation and embraces his role as a leader at Hellman.

As the old saying goes, the only constant in life is change and working in an industry such as Mr. Casal’s, changes are met at every step along the way. Whether those changes be guidelines, safety measurements, or technological advancements, Casal thrives on the day-to-day challenges. He believes it helps him grow personally and professionally and keeps him excited about the company’s future growth.

“At Hellman Electric, we have the talent, strength, and passion to take on all emerging technologies and I’m ready to lead our team and division into the next generation of construction.”

To learn more about Hellman Electric, contact us here.

Stay up to date with our current projects, news and more by following us on LinkedIn and Twitter.